Remodeling is about transforming your house into the beautiful, custom home that suits you and your family’s needs perfectly. With every renovation or home improvement, you’re bringing your house a little closer to your ultimate goals.

Kitchen Renovations are an exciting way to change the way that you use the space in your house. When you decide to remodel your kitchen, you’re doing more than just changing one room; you’re changing the way that you look at your home and bringing it a step closer to the perfect house that you’ve always dreamed of.

Kitchen renovations are a great first step towards owning a house you really love. Creating warm, inviting spaces in the rooms that you use the most is sure to have an impact on your home as a whole, and a great approach to effecting the most change with the least space.

At NR Renovations we’re happy to take your kitchen renovations from the drawing board through completion. From brainstorming and developing great ideas, through changing the layout, flooring, counter-tops and more in your kitchen, all the way through completing the final details, we’ve got you covered. Even if you’re not sure what direction you’d like to take with your new kitchen, we’re glad to help you begin thinking and planning.

NR Renovations is a full service bathroom remodeler bringing expertise and quality to your project. We help you design a bathroom that is right for your space, we will perform plumbing, electrical work, lighting, and construction to deliver the perfect bathroom you deserve.We invite you to create a beautiful bathroom and experience the difference ! For superior quality bathroom renovations in the greater Stratford area get in touch today to get a quote 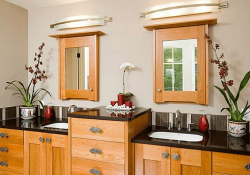 An effective bathroom design should address all your needs, physical and spiritual. Here are the most important tips to consider when considering bathroom renovations.

Basements are tricky. These large spaces beg for a new use, but they often become dumping grounds for all of life’s extras. If selling your house in this market isn’t an option but you want extra living space, you might find yourself pacing back and forth in the basement wondering if you can convert it to the room of your dreams. It’s not only possible — and the options are endless.
When you think of finished basements, you probably think of a room that isn’t finished to the standards of the rooms upstairs. This doesn’t need to be the case. The challenge of creating an inviting and beautiful space is greater in the basement, where the systems and infrastructure of your house need to be concealed tastefully.

A finished basement definitely adds value to your home, but be sure to check with your insurance agent. Some finished basements may not be insured — and don’t expect a bedroom there to count in the total of bedrooms when you sell the house

A deck is essentially an outdoor room, usually in a space you didn’t previously use. The extra space adds value to your home, but adding value to your life is a different story. A deck has to fit the way you live. And, of course, unlike the other rooms in your house, your deck has to handle exposure to the elements. Here are four considerations that will help you build the deck that best fits your lifestyle.